Despite professed enthusiasm from the Abe government to increase the number of women in the workforce and in leadership positions, writes EMMA DALTON, the statistics on women in politics in Japan are grim.

Anyone with a passing interest in contemporary Japanese politics will have heard of ‘Abenomics’—the bundle of policies created under the Abe government for the purpose of reigniting Japan’s stagnant economy. Prime Minster Abe apparently did not come up with the name, but it is very catchy and seems to have stuck.

Ensuring more women remain in the workforce rather than leave it after having children, and enabling them to reach higher positions will, apparently, increase Japan’s economic productivity. Certainly it makes economic sense to better harness the female portion of the population in the labour market. According to an International Monetary Fund report, if Japan’s female labour force participation rate increases from 63 per cent in 2010 to 70 per cent by 2030—which would bring it to the level of other G7 countries—the GDP would increase by 4 per cent.

The report goes on to predict that if the female labour participation rate were to increase even further, to that of northern European countries, GDP would increase by a further 4 per cent. As for specific measures in place to achieve higher numbers of women in the workforce and more women in positions of power, upon prompts from the government and relevant government agencies, many private companies have implemented a number of ‘positive action’ policies. For example, almost 60 per cent of member companies of Keidanren (Japan Business Federation) have implemented policies that aim to increase the number of women in managerial and executive positions, some with specific numerical targets and deadlines.

Despite this enthusiasm for empowering women in the workforce and an apparent drive to increase the number of women in power in the private sector and public service, there remains an eerie silence on the issue of gender inequality in politics. The statistics on women in politics in Japan are grim. In local and regional councils, women occupy approximately 12 per cent of seats. On a national level, the percentage of women elected to the Lower House in 1946, the first year women could run for office was 8 per cent. Almost 70 years later, that figure is now 9.5 per cent.

The percentage in the Upper House is somewhat better at 16 per cent. In the Diet as a whole, women occupy 12 per cent of seats, which places Japan at the bottom of the table amongst industrialised countries with regards to female political representation, and puts it on par with Nigeria, Congo and Bahrain. Prime Minister Abe’s current cabinet has three women in it. Eriko Yamatani and Haruko Arimura are well known for their conservative views, including towards gender equality. 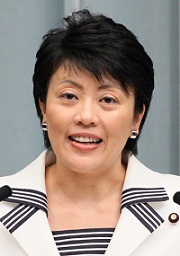 Abe’s appointment of Haruko Arimura (pictured), who opposes the idea that married couples should have the right to retain separate surnames and holds conservative views on women’s reproductive health rights, to Minister for State for Gender Equality, is indicative of the Abe government’s ambivalent approach to gender equality.

The government’s prioritised focus on womenomics and Abe’s public statements about it in international arenas might suggest a recent feminist awakening in the corridors of the Liberal Democratic Party (LDP) government. In fact, the government has ostensibly been proactively pursuing a ‘gender-equal society’ since the implementation of the Basic Law for a Gender-Equal Society in 1999. Many of the policies touted as part of womenomics have been in place since then. ‘Positive action’ measures, for example, to increase the number of women in senior positions and in ‘decision-making roles’ are a major part of the Basic Law.

Yet the dissonance between the plethora of policies to put more women to work and the lack of policies to include more women in politics is striking. Upon the directive of the Convention on the Elimination of All Forms of Discrimination against Women (CEDAW) and in the wake of many gender-equity policies implemented by the government over the last decade and a half, the Ministry of Health, Labour and Welfare has been documenting the uptake of ‘positive action’ measures, including numerical targets and quotas, in the private sector.

Over the last few years, the men in the LDP have realised that ‘equality is good for business.’ Language in official documents and speeches makes this clear. Yet there has been minimal pursuit by any ministry of political parties’ measures to address gender inequality in politics. This is left mostly to frustrated women’s groups.

When asked by women’s groups, such as the Alliance of Feminist Representatives and the Women’s Action Network, about the possibility of introducing gender quotas as a form of positive action to increase the number of women elected to office, the opposition Democratic Party of Japan has shown interest, but has failed to follow up on this articulated interest. The LDP simply rejects the idea, on the basis that it nominates candidates on ‘merit’.

As sociologist and policy expert Mari Osawa notes, over the last few years, the men in the LDP have realised that ‘equality is good for business.’ Language in official documents and speeches makes this clear. Womenomics is about ‘utilising’ women as ‘human resources’. It is best understood as having emerged in the context of a government facing prolonged economic recession and seeking solutions to the issues of low fertility and an aging population.

While encouraging women to participate more in the workforce makes economic sense, the benefits of having more women in politics are perhaps not as clear to LDP powerbrokers. Putting measures in place to ensure more women are elected to office would mean a redistribution of power—it would mean that the men at Nagatacho (the location of the Diet) would have to make way for women and their ideas and opinions, and in the process, relinquish some of their privilege and power.

The lack of political will by the leaders of the LDP to address gender inequality within the ranks of the party and the failure by the government, despite both domestic and international pressure, to encourage other parties to address the issue raises questions about the sincerity of the LDP government’s recent enthusiasm for policies that aim to empower women.

Until the LDP takes concrete measures to address the enduring gender imbalance in representative politics, and in its own ranks, the ethos of the ‘gender-equal society’ that apparently underpins policies to create a society ‘where women shine’ is questionable. Indications of change have begun to appear. In welcome news for frustrated women’s groups, on 26 January, a group of bipartisan Diet members was formed, with the objective of legalising an electoral quota system. The group is headed by DPJ’s Masaharu Nakakawa and LDP’s Seiko Noda is the deputy head.