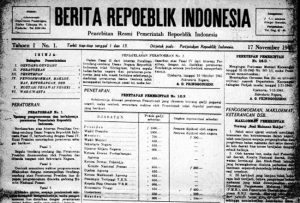 The newspaper, which is held by the National Library of Australia (NLA), reported on the support Australia gave to Indonesian independence.

The NLA’s Assistant Director-General, Collections Management, Amelia McKenzie, said the newspaper represented an important period in the history of Indonesia and Australia.

Ms McKenzie paid tribute to Indonesian scholar Anthony Liem, who initially approached the Indonesian Embassy after discovering the paper was not digitised.

‘Mr Liem was working on the 2015 exhibition at the National Maritime Museum in Sydney, Armada Hilat (Black Armada), about the remarkable relationship between the two countries post Dutch rule,’ Ms McKenzie said.

‘He used scans from our microfiche copy of the Berita Repoeblik Indonesia, but on discovering it was not available online, approached the embassy to request funding so it could be digitised.

‘We would like to thank Mr Liem and the embassy for making this happen.’

Berita Repoeblik Indonesia can be accessed via the National Library’s Trove service.