A Murdoch University PhD student who spent four months covertly employed by a construction firm as part of his research, and a specialist in the history of activism, social movements and the Indonesian left are the 2014 joint winners of the ASAA’s prestigious Thesis Prize for the best Asian Studies doctoral thesis written in Australia. 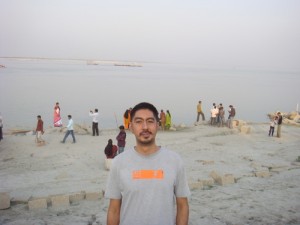 Dr Charanpal Bal (pictured), who studied at the Asia Research Centre and the School of Management and Governance at Murdoch, and Dr Vannessa Hearman, a lecturer in Indonesia Studies at Sydney University, will each receive $2000 in prize money.

Dr Bal’s thesis, entitled ‘The Politics of Obedience: Bangladeshi Migrant Workers and the Migrant Labour Regime in Singapore’, links adjustments in the Singapore migrant labour regime to patterns of conflict in the workplace, in the case of Bangladeshi construction workers.

Through working at a construction firm in Singapore, Dr Bal was able to record the patterns of workers’ daily engagement with immediate supervisors and their employers.

He also travelled to labour-sending communities in Bangladesh, where he was able to link workers’ grievances and struggles in the workplace to their own migration objectives, their family and community’s expectation of that migration and the political economy of the recruitment process.

Since completing his thesis, Dr Bal has had a journal article accepted for publication by the Journal of Contemporary Asia and is finalising a book proposal from the thesis.

In her thesis, entitled ‘Dismantling the “Fortress”: East Java and the Long Transition to Suharto’s New Order Regime (1965–1968)’, Dr Hearman (pictured) charts the journeys of a group of activists and individuals caught up in the persecution and banning of the Indonesian Communist Party in 1965–68 in East Java, including the party’s final attempt to resist the New Order regime by constructing a base in the southern reaches of the province.

Using an array of sources, including oral testimonies with survivors and perpetrators and military and government reports about the repression, the thesis captures experiences of activism from the 1940s onwards and then in living under the shadow of the repression. The thesis presents new dimensions about the slaughter of leftists and the power struggle occurring in East Java.

Dr Hearman is presently drafting this thesis into a monograph and has begun researching the history of Timorese and Indonesian activists working together in the 1990s for Timorese self-determination.

The runner-up was Dr Tom Cliff for a thesis at the Australian National University entitled ‘Oil and Water: Experiences of Being Han in 21st Century Korla, Xinjiang’.