Many Indonesians risked their lives to help fugitives from the anti-communist purges that marked the birth of the New Order regime—but, writes VANNESSA HEARMAN, their stories remain untold.

In spite of the extensive violence against the Indonesian Communist Party (PKI) in 1965–66, sections of the party’s leadership and activists, as well as its mass base, survived the anti-communist purges.

They managed to do so because the Army and its propaganda campaign did not succeed in completely alienating Indonesians from their fellow citizens and comrades. Many people were not immediately convinced by the campaign or supportive of the new regime, and found the witch-hunts repugnant.

The nature of clandestine activities is such, however, that even today—in spite of the need for a national accounting of the events of 1965–66—the helping of fugitives during this time remains a grey area that is still difficult to research and publicise.

The mass killings of PKI members and sympathisers occurred as a result of a failed coup on 30 September 1965, which was blamed on the party. Seven high-ranking army officers, including Armed Forces Chief General Ahmad Yani, were kidnapped and killed by the 30 September Movement, a grouping consisting of sections of the military. The Movement’s leadership argued that they took pre-emptive action to save President Sukarno from an imminent coup by the Army leadership. The facts surrounding the plot, and the Movement’s origins and intent, are still debated today.

The propaganda war against the PKI associated the party with the 30 September Movement. This was possible because of the presence of a number of leftist volunteers at the Halim Airbase in Jakarta on the days that the Movement was most active, and by the suggestion that PKI chairman D.N. Aidit and the party’s Special Bureau had had discussions with Movement leaders before the coup attempt. Lacking support in the Armed Forces, the Movement was isolated and defeated by the Army within days.

The Army then moved against a larger enemy, spearheading a suppression campaign against its main political rival, the PKI. The campaign involved intense violence and media propaganda against the left. Half a million people were killed in the anti-communist purges from October 1965, mostly in Java and Bali. More were imprisoned for varying lengths of time, frequently without trial.

When the purges began, many leftists were unprepared for their ferocity. The PKI and its mass organisations of women, farmers, students, youth groups and trade unions were supported by more than 20 million Indonesians, according to Aidit in 1965.

From being feted to being hunted overnight, the party’s followers were unaccustomed to the clandestine existence they were now forced to lead. Some, like Oey Hay Djoen, who had been actively involved in the left-wing cultural organisation Lekra (People’s Cultural Institute), refused to run and hide because they disagreed with the accusation that the PKI had masterminded the coup attempt. They would prove they were unafraid by not going into hiding.

Activists on the run

However, as evidence mounted of mass killings of the left in the countryside, activists went on the run to avoid capture or violence. Support networks enabled fugitives to survive on the run for two years or more, in spite of Army instructions not to assist the PKI in any way.

The Provisional People’s Consultative Assembly passed a decree in 1966 banning the party and associated mass organisations. As this decree remains in force, I found when researching these support networks that it was more likely for the fugitives to reflect on these acts of kindness, rather than for the ‘rescuers’ to speak about what they did. The secretive nature of these acts means that the rescuers are often difficult to trace, and information about their deeds survives predominantly in the oral accounts of the people they helped.

There is enormous guilt and shame among some Indonesians about what occurred in this period. Some believe they should have done more to stop the violence.

Why did so many Indonesians agree to risk their safety to shelter or provide for the fugitives? First, they were reluctant to cooperate with the Army because they were suddenly required to cut ties with communists, many of whom were their workmates, colleagues, relatives and friends. Their willingness to help those on the run also attests to the political uncertainty at the time.

Differences within the military and the survival of tattered remnants of the PKI led to a situation in which the new regime’s victory was not assured. The purges also gradually extended to target pro-Sukarno activists such as those on the left wing of the Indonesian Nationalist Party (PNI).

Glimpses of this opposition movement could be seen up to 1969, with the fragmentation and decentralisation of opposition forces such as in Borneo/Kalimantan and in East and Central Java.

In hindsight, such opposition movements might seem ridiculous given the seemingly omnipotent strength of the New Order. The opposition was certainly outnumbered and outgunned—as the counterinsurgency Trisula Operation in East Java, from June to September 1968, showed when thousands of New Order soldiers and auxiliaries, aided by tanks, artillery and air power, decisively defeated a small PKI-led base in mountainous areas in south Blitar.

However, the many acts of kindness and resistance by ordinary people that enabled many fugitives, like Putmainah (pictured below), who lived on the run until her capture in 1968 in south Blitar, to survive remain largely unresearched. These acts, too, constituted a form of opposition—though scattered, fragmented and less dramatic than the early attempts to take-up arms in Java and Borneo. 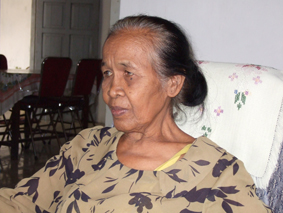 Some fugitives returned to their hometowns, usually in the bigger cities where anonymity was easier to achieve and sought refuge with their families. High-ranking PKI or 30 September Movement leaders and activists sought refuge away from their families, because they had been identified as targets of the military or raiding gangs. Others relied on political networks to avoid capture and provide sustenance for those in prison.

In East Java, as killings and raids intensified in rural areas, political refugees arrived in the city of Surabaya, which became the gathering point, whenever possible, for surviving PKI leaders from the rural areas. Local groups that protected and hid party cadres and activists grew. But the city itself was not necessarily easy to reach, because of curfews and military checkpoints in many parts of the province.

There is enormous guilt and shame among some Indonesians about what occurred in this period. Some believe they should have done more to stop the violence—so stories of survival and small acts of resistance in the climate of fear and violence of the mid-1960s are vital to mitigate this guilt.

The continuing ban on the PKI and its affiliated organisations, however, means Indonesians are still hesitant to acknowledge these acts of resistance, because of concerns about how they might be perceived.