One of Australia’s most significant collections of Japanese art—woodblock prints known as kuchi-e—will go on show for the first time in a new exhibition at the National Library of Australia, ‘Melodrama in Meiji Japan’. 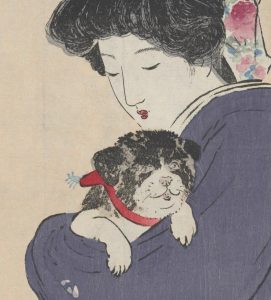 [/ratina]Used to illustrate Japanese novels, kuchi-e (‘opening picture’), complement the stories which reflect the tumultuous world of the Meiji period in Japan, from 1868–1912.

Exhibition curator Dr Gary Hickey said the Meiji period was a time of great upheaval in Japan with the transition of the country from a feudal society to an emerging western-style state.

‘This upheaval was reflected in a dramatic change in people’s lives,’ Dr Hickey said. ‘Influenced by the West, this change was reflected in new literary forms and innovative means of reproducing images for published works.

‘Prominent in this period were literary frontispieces known as kuchi-e,’ he said. ‘Artists used the medium of the traditional multicolour woodblock print in images to illustrate stories that stressed the melodramatic.”

Dr Hickey has drawn on the substantial collection of kuchi-e donated to the National Library by UNSW emeritus professor Richard Clough from 2010 until his death in 2014.

‘This collection, along with other works acquired by the Library, forms one of the most significant collections of this genre in the world and the largest focused collection of Japanese art in Australia,’ Dr Hickey said.

‘The exhibition features more than 20 artists and a range of subjects—all filled with drama, tragedy and intrigue—which reflected the Meiji times.’