A new prize-winning book that examines sex and sexualities in contemporary Indonesia was born out of a shared frustration, write the editors, LINDA RAE BENNETT and SHARYN GRAHAM DAVIES.

Having been asked numerous times to deal with such diverse and complicated topics as ‘Islam and sexuality’, or ‘gender and sexuality in Indonesia’, or even ‘queer sexualities in Asia’, in a one-hour lecture or single required reading left us with a difficult choice: we could either opt out of these invitations and, by doing so, further reduce the visibility of these topics, or provide shallow reductionist overviews that did little to disrupt widespread stereotypes. 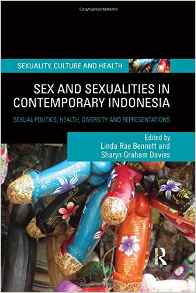 Following a good deal of venting across a table at a homestay in Bali in 2010, we subsequently decided an extensive volume on sex and sexualities in Indonesia was needed. As the ideas flowed, it was decided we would send an email to all the key researchers writing and publishing on sex and sexualities in Indonesia. So much had changed in the 15-odd years since the end of the New Order regime, and the impact of these changes and the ways sexual politics is implicated in them simply had not been explored in this new era to a great extent.

It was also decided that a seminar, where all invited contributors could gather to exchange ideas and decide on shared objectives for the volume should be organised. The Auckland University of Technology kindly fronted up with $10,000 to offset the costs of travel and accommodation for participants and contribute to catering.

At the seminar we decided on the book’s key objectives: it should highlight historical and newer forms of sexual diversity, as well as the social responses they provoke; it should also critique differing representations of sexuality, pointing to the multiplicity of discourses within which sexuality and the sexual are understood in modern-day Indonesia.

The resulting book—Sex and Sexualities in Contemporary Indonesia: Sexual Politics, Health, Diversity and Representations—has just been awarded the Ruth Benedict Book Prize in the ‘Outstanding Edited Volume’ category to acknowledge excellence in a scholarly book written from an anthropological perspective about a lesbian, gay, bisexual, or transgendered topic.

The book is the result of work by 20 researchers who wanted to broaden people’s thinking about sex and sexuality.

People tend to think about sexuality as just sex, and we felt it was important to show that it’s also about an extraordinarily broad range of experiences and issues such as reproduction and infertility, sexual health and HIV, violence and discrimination, pleasure and identity, cultural and artistic expression, consumerism and so on.

The book speaks to issues as diverse as sexuality in polygamous marriages, Indonesian beauty pageants, the impact of sexually transmitted infections on infertility, sexuality and reproduction for HIV positive Indonesians, surveillance and pornography; and sexuality in dance and literature. It delves into the sexual lives and subjectivities of young people, adults and older adults, and looks at sex across a wide range of relational contexts. While a number of key researchers were not able to contribute at this time, this leaves scope for a second volume.

One of the volume’s key contributions, we feel, is the disruption of stereotypes. We see author’s engaging with the nexus between religion and sexuality in ways that are far more dynamic than the stereotypical assumptions that Islam leads to the overarching sexual repression of women. We see the treatment of sex work as a site for unpacking sexual subjectivities and not just a discussion of risk and disease, which is too often the case. We see deconstructions of commonly held assumptions about women’s sexuality in polygamous marriages. Importantly, we repeatedly see how sex and sexuality are continuously contested and lie at the heart of Indonesian politics in both the public and private spheres.

While it might strike some as a surprise that a book that is not explicitly about queer issues won a queer award, this is perhaps precisely why it won.

While it might strike some as a surprise that a book that is not explicitly about queer issues won a queer award, this is perhaps precisely why it won. What distinguishes it is its very mainstreaming of gay, lesbian, bisexual and transgender (GLBT) lives, presenting GLBT experiences as they are lived, not separate from a largely heteronormative society, but indeed as constitutive of it.

One of the great things about winning the Ruth Benedict award is that it gives Indonesian authors, who often find it hard to get a platform for their work, just such a platform. Another benefit is that it gives greater visibility to conversations about sex and sexuality in Indonesia—conversations that we hope are ongoing in both academic and activist circles.

By collaborating with so many Indonesian authors we have explicitly aimed to give voice to their views and struggles for equal sexual citizenship and sexual rights in Indonesia. For scholars of Indonesia more generally this book is also important because it speaks to how the extraordinary diversity of Indonesia in social, economic, cultural and religious terms is manifest through and by the diversity of Indonesian sexualities.

Dr Linda Rae Bennett is a medical anthropologist at the University of Melbourne. Her work has concentrated on gender, sexuality, and biological and social reproduction in South East Asia, Australia and the Pacific.

Sharyn Graham Davies is Associate Professor in the School of Social Sciences and Public Policy at the Auckland University of Technology.