Under the guise of traditional cultural practices, the dowry system is becoming a much bigger political and economic aspect of modern Indian society, writes SWATI PARASHAR.

Twenty-five-year-old Sunita, from a backward caste family, was married off with much fanfare. Within a year her body was found at her in-laws home with distinct and suspicious injury marks. The doubting public voices were hushed up in an overwhelming verdict of suicide. No case of suspicious death of a normal healthy woman was registered; her constant complaints about harassment for dowry were ignored.

Twenty-four-year-old, educated, upper-caste Veena was mentally and physically harassed for dowry before she filed a policecomplaint, and chose to seek divorce. Seventeen-year-old Gudiya was found dead in a well at her in-laws home, with two large stones tied to her legs. All evidence suggested she had been mentally and physically tortured. Local media reported the constant demands for a colour television by her in-laws. This news would not even find a mention in any English-language national media. I knew the first two women personally, and have seen how dowry has become part of social status in India and remains entrenched in the social ethos.

The dowry system is one of the most powerful cultural unifiers in Indian society. Most Indian marriages involve dowry in the form of paying for an opulent marriage ceremony, arranging for lavish festivities, and also for providing extravagant gifts for the groom’s family.

The dowry component has gradually become the most essential part of an Indian marriage, not only for Hindu marriages, but also for Muslim, Christian and tribal marriages. Dowry is not a one-time transaction that happens only at the time of marriage. The groom’s family expects—often demands—a continuous flow of exorbitant gifts on social, cultural, religious and family occasions over a period of time. However, the tranche of financial and material transfer occurs at the time of marriage. To subvert the laws, these are camouflaged as gifts given to one’s daughter to establish her new household.

To claim that dowry in India represents only a social and cultural morass is to ignore a much bigger political and economic aspect that affects half the population. Dowry allows normal, otherwise genteel Indian families to practise blatant gender apartheid under the guise of traditional cultural practices. Indian households refer to their daughters as paraya dhan—someone else’s wealth or property—and it can be argued that the notion that the daughter has to be married off into a different family and leave her paternal home is the source of continuous discrimination against the girls.

The idea that your own daughter is someone else’s property until she grows up and is married off implies that any significant investment in her upbringing, nutrition, education and other developmental aspects will not benefit her paternal family but her in-laws family. Therefore, instead of spending money on developing the girl’s human capabilities, a portion of this money is saved to be presented as dowry to her in-laws.

Thus the idea of dowry places girls in a disadvantageous position in terms of availing proper educational, development and employment opportunities. The lack of proper education affects their employability and that, in turn, affects their chances of being financially independent after marriage. 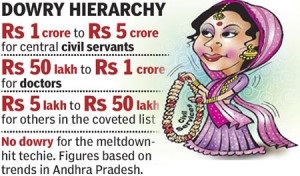 The provision of dowry is, therefore, a kind of buying post-marriage financial security for girls. An integral part of providing for dowry implies complete forfeiture of girls’ property rights and the dissolution of any claims by them to the ancestral property.

The falling sex ratio in India has reached alarming proportions in several states. Most of these states are quite notorious for crimes against women related to dowry issues. Paradoxically, however, the falling sex ratio does not seem to have any direct correlation to the availability of suitable grooms without dowry. The lack of sufficient educational, training and employability for women renders them dependent on either male relatives at the paternal home or their husbands at their in-laws home.

India has implemented anti-dowry laws to tackle the growing menace of bride-burning, murder and other dowry-related crimes against women. A law banning the practice of dowry was passed in 1961 and amended in 1986 to treat any violence against women within the first seven years of marriage as dowry-related. However, the spectre of dowry has mutated into different forms and found newer ways to subvert the rulebook. The major portion of Indian administration, police, judiciary, and even members of civil society, are steeped in patriarchal ways of thinking and, despite all the laws, it is extremely difficult for women to even register a police complaint against dowry-related harassment.

There are also complaints against the misuse of dowry laws by some disgruntled women, and some have campaigned—unsuccessfully, so far—to dilute the existing anti-dowry laws. In one of its rulings, the Indian Supreme Court allowed the misuse of anti-dowry law by women as a sufficient ground for their husbands to seek divorce.

In the midst of these arguments, the incidences of crimes against women related to dowry have increased alarmingly. The Indian National Crime Records Bureau reported 8083 dowry deaths in 2013—one dowry death every hour. The number of cases registered under the Dowry Prohibition Act increased markedly, by almost 300 per cent, between 2003 and 2013. One has to see these figures in perspective, as social and cultural norms coupled with administrative apathy dissuade many women from seeking police or judicial assistance. These statistics probably represent only a small fraction of dowry-related incidences, which may range from passive-aggressive behaviour to murder.

The new and confident India is essentially neoliberal—a society that has been hooked on the culture of consumerism and on flaunting affluence. The treasure trove of dowry reflects India’s fascination with latest fancy gadgets, luxury cars, property, precious metals, and now even shares in blue-chip companies.

Rising education levels seem to inflate the demand for dowry rather than liberate the new India from this orthodox and obnoxious custom. Non-resident Indian grooms educated or employed overseas seem to be a perfect match and therefore draw higher dowry biddings in the marriage market.

Women married into some of these non-resident Indian families face domestic violence or other forms of aggression at home due to the perceived lack of sufficient dowry. Australia has witnessed a number of serious crimes against women in the Indian community, and several of these are linked to the unfulfilled expectations of dowry.

Some prominent members of the Indian community in Australia have even asked for both parties in spousal visa applications to provide statutory declarations that no dowry has been taken or given. Former Victorian premier Ted Baillieu campaigned to outlaw dowry in marriages in Australian–Indian communities, whether the transaction takes place in India or Australia, and sought to list either dowry or coercive money demands in a new marriage as a form of economic abuse under the Family Violence Protection Act.

Laws exist, and more will be enacted, but the biggest onus on ending this practice lies with Indian families and the Indian community. We could start by asking questions of our own relatives, friends and neighbours—it doesn’t just happen out there, but right in our homes and backyards.

Swati Parashar is a lecturer in Politics and International Relations at Monash University.