The ASAA’s report on Asian Studies in Australian universities is now out! See here to download the report. This report provides an extensive review into the state of Asian Studies, including topics such as:

For about half a century, Australia has been a global leader in the study of Asia. The Asian Studies Association of Australia (ASAA) is the peak academic association for the study of Asia in Australia. The ASAA report – Australia’s Asia Education Imperative – is the fifth ASAA report since the 1970s. The report focuses on trends in the promotion of Asia literacy in Australian universities from 2000 to 2022, outlining both achievements and challenges. While the overall picture is complex, the report identifies a decline in government and, in many cases, university support, pointing to growing challenges in Australia’s efforts to promote Asia literacy among Australian graduates at a time that Asia’s global prominence and influence is more obvious than ever. The report proposes a set of recommendations to the government and to universities in order to renew and strengthen national commitment to Asia literacy.

The ASAA’s recommendations to the government and Australian universities offer a future vision to realise Australia’s Asia education imperative in the next two decades. 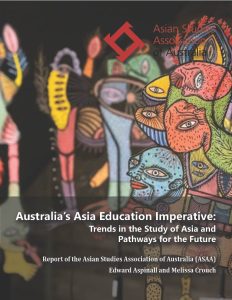