China’s deployment of an oil rig in waters near the strategically located Paracel Islands has severely strained bilateral relations with Vietnam, writes Carlyle A. Thayer

The Paracel Islands (Hoang Sa in Vietnamese and Xisha in Chinese) are a group of approximately 30 features (small islands, rocks, reefs and sandbanks) lying at the northern end of the semi-enclosed South China Sea. The Paracels consist of two groups of features, the Amphitrite group in the northeast and the Crescent group in the southwest. The total land area is estimated at roughly 8 square kilometres embracing a maritime zone of 15 000 square kilometres. 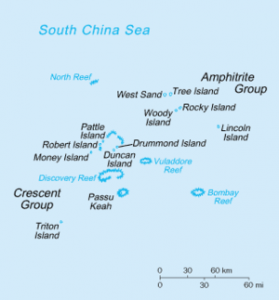 On 1 May, the China National Offshore Oil Company (CNOOC) announced that it was placing the M/V Hai Yang Shi You 981 (HYSY 981) mega oil rig in waters to the west of the Paracel Islands in order to commence exploring for oil and gas. CNOOC also announced an exclusion zone of one mile in radius around the oil rig from 2 May to 15 August.

The HYSY 981 was escorted by an armada of nearly 70 ships, including China Coast Guard vessels and People’s Liberation Army Navy warships. Vietnam responded by despatching nearly 30 Coast Guard and Maritime Surveillance Force vessels to the area to confront the Chinese and order them to leave Vietnam’s Exclusive Economic Zone (EEZ).

China’s deployment of the oil rig immediately triggered non-violent urban protests by the Vietnamese intelligentsia and violent rioting by Vietnamese workers in industrial parks. These riots not only targeted Chinese companies but quickly spilled over to affect companies owned by Taiwan, South Korea, Thailand, Singapore, Malaysia and even privately owned Vietnamese enterprises. China immediately sent ships to evacuate Chinese managers and workers from Vietnam. At least four Chinese were killed in the riots.

The Vietnamese government immediately stepped in to restore law and order. Over one thousand Vietnamese workers were arrested. Several were charged and put on trial. Vietnam’s violent anti-China riots put a severe strain on bilateral relations with Beijing.

Since 2 May an unequal war of attrition has taken place on a daily basis in the waters surrounding the HYSY 981. China has increased the strength of its armada to over 110 ships, including steel-hulled fishing boats. China has also deployed military and civilian enforcement aircraft in an intimidating manner. Vietnam has refrained from deploying its navy and air force.

China charges that Vietnam has dropped fishing nets and other debris into the waters around the HYUSY 981 and sent in frogmen to disrupt the operations of the oil rig. On 8 June an official Chinese Foreign Ministry statement accused Vietnam of ramming Chinese ships 1416 times. Given Chinese estimates that 69 Vietnamese vessels and boats were present, this means that on average each Vietnamese boat conducted 20 separate rammings each. This figure seems incredulous.

What accounts for this violent confrontation? From the Chinese perspective, its deployment of the HYSY 981 to Chinese waters was an entirely normal commercial operation. Chinese officials argue that they conducted exploration activities in this area for the past decade without any protest by Vietnam. China views Vietnam as the provocateur.

China also argues that the Northern Song Dynasty (960–1126 AD) discovered the islets and rocks that make up the Paracel Islands and, through naval patrols, established jurisdiction over them. Bill Hayton, in a book to be published by Yale University Press in September (South China Sea: dangerous ground) argues, to the contrary, that the Chinese state only showed interest in the Paracels in 1909 when the Qing Dynasty dispatched a naval flotilla to the area and raised the Chinese flag on Woody Island.

According to UNCLOS, a contiguous zone only entitles a coastal state to ‘exercise the control necessary to: (a) prevent infringement of its customs, fiscal, immigration or sanitary laws and regulations within its territory or territorial sea; (b) punish infringement of the above laws and regulations committed within its territory or territorial sea’.

Vietnam argues that the Chinese oil rig is operating within its EEZ and continental shelf and therefore is a violation of its sovereign rights. Vietnamese officials dispute China’s claim that Vietnam acquiesced in Chinese exploration activities over the past 10 years. Vietnamese officials argue that they were not aware of all activities conducted by China on the outer limits of its EEZ. These officials further argue that when they became aware of Chinese activities they lodged diplomatic notes in protest.

What is the legal position under international law? China and Vietnam are entitled to maritime zones based on land features under the UN Convention on Law of the Sea. Both countries have promulgated EEZs from their baselines. These overlap. Under international law the two sides are enjoined to undertake provisional measures until the overlapping area is delimited. Until a final determination is made, both parties are not permitted to upset the status quo or use force or the threat of force.

‘China wants good relations with Vietnam, but there are principles that China cannot abandon.’

Vietnam has not attempted to develop this area where the HYSY 981 is currently operating. China, on the other hand, unilaterally placed the HYSY 981 in waters that have not been delimited, in violation of the above legal principles. Chinese officials concede that the disputed area has never been delimited. But they reject international law as a basis for a settlement. For example, China’s Ambassador to Australia, in an article published in The Australian (13 June) argued, ‘no matter which principle [of international law] is applied these waters concerned will never become Vietnam’s part of EEZ and continental shelf’.

From the outset Vietnam has adopted a conciliatory diplomatic posture. Vietnam has called repeatedly for the activation of the hot line between high-level leaders, or failing that, for China’s agreement to receive a special envoy. Vietnam claims that China has not responded positively to any of these approaches. On 8 June China’s Foreign Ministry stated, ‘China wants good relations with Vietnam, but there are principles that China cannot abandon. The channel of communication between China and Vietnam is open…’ but Vietnam must ‘respect China’s sovereignty, sovereign rights and jurisdiction’.

The current war of attrition surrounding the HYSY 981 can be expected to continue at least until 15 August when the rig is scheduled to cease operations. China and Vietnam have both lodged claims with the UN Secretary General raising the possibility of face-saving mediation.